The conceptual piece contained in this room contains several different symbolic elements. A church pew, stood upright in halves, represents not only the twin towers but “The Christian West” and all the things despised by the terrorists who conducted the attacks on 9/11/2001. The pew has in fact been violently sawn in half, its legs removed. The two pews are erected in an empty room, symbolizing how 9/11 overshadowed everything else that may have been going on that day. In addition, the space is locked and we can only look in, as many of us could only watch the events of 9/11 through the media, at a distance. The title is one that is meant to be taken in several different ways. On that day many lost their lives; the towers were broken apart – set apart. Peace was broken apart – set apart. Our conflicts also set us apart from one another, just as we cannot enter the room, and as the two monoliths are not one. However, “holiness” or “sacredness” can also be understood as setting something apart, to give it honor, space and time, just we we honor those who died and those first responders who saved so many. 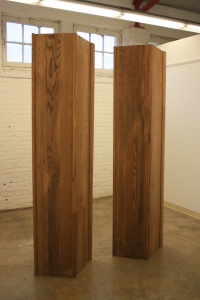